Nice day touring Speyside distilleries with Dorianne and her three friends from Canada - seen here at the Macallan tasting.

Beautiful April weather for our whisky tour with Richard and his father from Switzerland - seen here at the 16th century Packhorse Brig near Glenlivet.

A lively three day all encompassing tour with Chad, Cara and Ryan from Nevada “ Dear Derek, just wanted to say thank you for creating memories I will enjoy and talk about for the rest of my life. You are an amazing person and very humble. I am thankful to have met you and hope I will be able to in the future - Chad

Autumn Tours
Sue and Robert visited from Hawaii and based themselves in Ballater. We enjoyed two days of touring which not only covered distilleries but also Balmoral castle. Seen here enjoying a dram near Braemar.

“Thank you so much for your time, expertise and hospitality, we love what we have seen so far. Derek, Robert learned so much more about Scotch and Scotch production and is eager to go home and try what he has learned. We wish you the best in your tour business - you are a great ambassador of Scotland and the Scotch industry - Much Aloha - Robert and Sue ”

Renato and Chris also travelled a long way from Brazil but enjoyed our cold but sunny November weather. Seen here at Glenfiddich Distillery, one of five distilleries visited over a two day tour.

A very busy summer in Speyside
Here is a selection of my guests who I have enjoyed showing beautiful Speyside and its distilleries in super weather over August and September. click on the small image to display a larger image “Thanks Derek - we really enjoyed ourselves and learned a lot" Mark & Linda, Los Angeles

Dorota and her husband said:
Dear Derek, We wanted to thank you for the fantastic whisky tour we experienced with you in August. Your tremendous knowledge of all facets of whisky, the Speyside, Scottish history and more is truly outstanding and combined with your humble personality make you a true gem of a guide. It was a real privilege and we highly recommend that any whisky lover should try to share it at least once in a lifetime!

Early July 2016
Well travelled friends Teddie and Karen from USA visited Scotland for a few days, and I was able to give them a taste of Speyside in one day. Glenlivet , Cragganmore, Highland Cattle and Findhorn Bay were among the stopping off points. 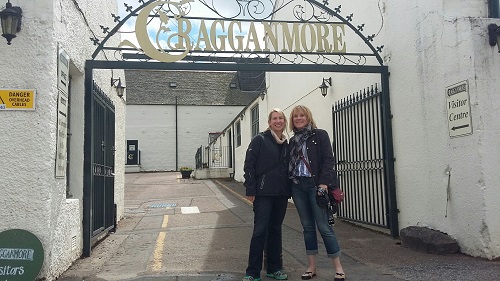 “ Thanks !! it was a great tour. We had a good time and learned a lot. Derek is a great guide. Highly recommend this tour”  Teddie Bridget Proctor.

“Fabulous day out!. I could not complement or recommend Derek enough. Thanks Derek ! - Karen Ann. 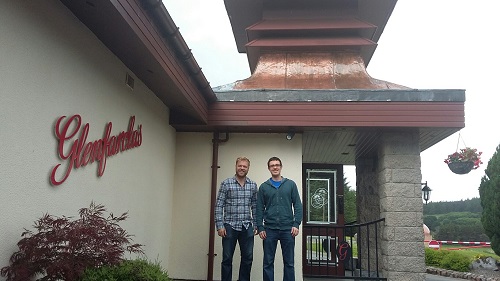 Had a good day with Peter and Matt from USA. Visited Cragganmore, Glenfarclas, then onto Glenfiddich. "We had a blast" - was their parting comment.

Ian and Hamish - Canada
Early June I had a "grand tour of Scotland" with Ian and Hamish from Canada. This was much further afield that my normal territory, however it was a great adventure. From Glasgow to Islay, Oban, Skye, Speyside and return via Dalwhinnie - six action packed days.

"Interested in whisky and wishing for travel to a magical space?

‘SpeysideWhiskyExperience.com’ has a solution which coddles you through the best of this Scottish side of the world, refreshing every step of the way. Relishing an occasional tipple to contemplate the merits of a peaty Islay or a mellow Speyside, Derek Hancock (former Export Manager of Gordon & MacPhail of Elgin, Scotland) after more than 40 years in the whisky business, showed us the way. Six days in company with Derek flashed by as we put up our feet and sampled our way through some of the world‘s finest single malts. Met at the grey dawn in Glasgow arrivals and whisked into the Highlands, Derek‘s encyclopedic knowledge of whiskies concomitant with his easy personality matched our needs and exceeded every expectation for our wonderful Scottish venture. Highly Recommended! Father & Son - Ian & Hamish Cowan - June 2016."

GluGlu2000 Whisky Club
Late April to coincide with the Spirit of Speyside Whisky Festival, Mauro Leone and members of his "GluGlu2000" Whisky Club from Como, Italy arrived in Speyside for a few days as part of a longer tour. By the way, GluGlu refers to the sound of whisky being poured from a bottle ( in English we would say glug glug ! ).
Mauro had put together a long list of distillery visits, including an interesting section "Chasing Ghosts" when we visited the sites of long lost distilleries and had a dram of that whisky on the site ( imagine us in the car park of a Co-op store in Inverness - Glen Albyn )
Distilleries visited included Clynelish ( and Brora ), Glenmorangie, Glen Ord, Dallas Dhu, Dalmunach ( special arrangement ), Ballindalloch, Auchroisk ( SOSWF Dinner ).
We also paid homage to quite a few others by having a dram and a special biscuit made in Italy to match each distillery style in the car park or previous site - Royal Brackla, Teaninich, Balblair, Invergordon, Glen Albyn, Glen Mhor, Millburn, Benrinnes, Glenallachie, Craigellachie, Caperdonich. Quite a list !
PS - I only had the biscuit

In early May I was happy to welcome a group of four from the hotel Waldhaus am See in St Moritz, Switzerland. This hotel includes one of the world's top whisky bars - The Devil's Place, which has entries in the Guiness Book of Records as having the biggest selection of single malts. The current General Manager and owner, Sandro Bernasconi with his deputy Felix and two key staff wanted an in-depth insight into the Speyside Distilleries which they offer at the hotel. I was pleased to oblige with information and visits to Glenlivet, Glenfiddich, Glenfarclas, Glen Grant, Benromach and the Speyside Cooperage. In between visits they enjoyed lunches and dinners at the Mash Tun, Aberlour , Glenfiddich cafe and The Drouthy Cobbler pub in Elgin. 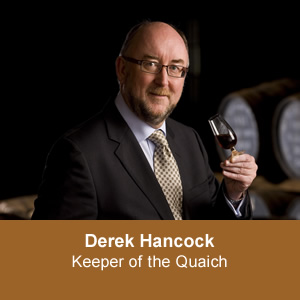 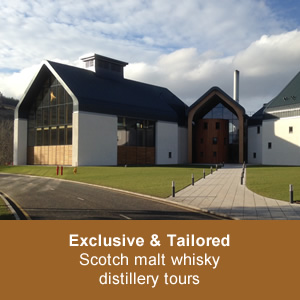 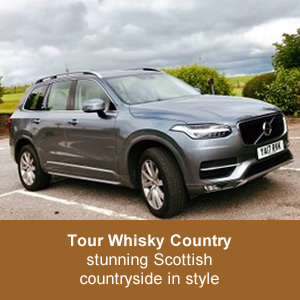